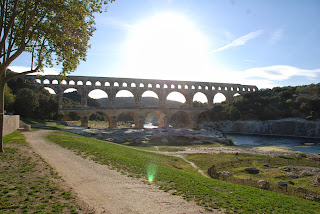 The 1989 bestselling book "A Year in Provence" by Peter Mayle has inspired many people to visit this diverse area and cycling holidays in France's Provence region offer the ideal opportunity to really experience the landscape and culture this area has to offer – and you only have to spend a week!

Our 'Provence and the Camargue' tour (Tour FPC8) provides you with a taste of many of the region's most attractive and well known aspects including a fascinating history, amazing but seldom-seen art and exotic wildlife – in just 8 days and 7 nights.

Cycling Holidays Provence – Find out more detail of our 'Provence and the Camargue' cycling tour.

Rich History
Provence is one of our most popular destinations for cycling holidays in France, not least because of its fascinating history, much of which is still very much in evidence on this tour.

The tour begins and ends in the city of Orange, home to a magnificent Roman theatre which is still in use for plays and festivals throughout the year; and a visit to the Orange Museum will reward you with yet more Roman exhibits from Orange, including a number of friezes rescued from the theatre itself, as well as finds from the nearby archaeological site of Glanum. You will see (and even cycle over) a number of Roman structures on this tour including the aqueduct at Pont du Gard (Day 6) and the amphitheatre and baths at Arles (Day 3 and 4).

For those who enjoy Medieval or Renaissance architecture, Provence is an ideal destination – almost every town and village you pass through will have something to offer from these periods. Day 2 takes you to Châteauneuf-du-Pape, home to both the legendary red wine of the same name, and several French popes in the early 14th century. Nowadays the town retains much of its medieval character with narrow winding lanes. Next stop on this route is Avignon itself, where you will stay at the end of Day 2. Avignon was the official base for the French popes, with the Palais des Papes offering some of the best Gothic architecture to be seen anywhere in the world.

For those who would like to find about the region's prehistoric and Roman history in more depth, we recommend a visit to the Musée Départemental in Arles (you will be spending 2 nights here so there is plenty of time).

Hidden Art Treasures
If you have time to go inside the Palais des Papes in Avignon, you will be rewarded with excellently preserved late Gothic art on the walls and ceilings of the Saint-Martial and Saint-Jean chapels. For those interested in art history, these richly coloured murals and ceiling paintings clearly prefigure the imminent Renaissance period and are as impressive as many Renaissance chapels to be seen in Italy.

Arles is, of course, well known as the place where Vincent Van Gogh resided between 1888-1889, producing many of his most iconic paintings under the intense Provençal sun, including Sunflowers, Wheat Fields and The Red Vineyard. While almost all of Van Gogh's work is housed in the Van Gogh Museum in Amsterdam, and other major galleries around the world, a visit to Arles gives you an opportunity to explore some of the influences on his work, by visiting the Café Van Gogh in Arles itself, depicted in his Café Terrace at Night, or simply ride past some of the many fields and vineyards that feature in his paintings.

It is perhaps only Van Gogh who is capable of overshadowing the many other famous artists associated with Provence. The Musée Angladon in Avignon (Day 2) holds a wide collection of modern art from the 18th, 19th and 20th centuries, featuring work by Paul Cézanne (France's most famous post-impressionist and a native of Provence) and Picasso (who moved to Provence in 1959). The museum also boasts works by Degas and Paul Gauguin (who was a companion to Van Gogh in Arles for some time). But perhaps the greatest treat here is to see the only work by Van Gogh to be displayed in Provence, the lesser known but utterly vibrant "Wagons de chemin de fer" (railcars) which was painted during his stay in Arles.

Spectacular Wildlife
On Day 4 we offer a complete change of scene, taking a circular route into the Camargue region, a nature reserve rich with wildlife of all kinds. The Camargue is western Europe's largest river delta, lying between the two branches of the Rhône, and contains extensive wetlands which attract more than 400 species of birds. Pink flamingos abound here, attracted by the extensive inland saltwater ponds. But equally appealing are the famous Camargue wild horses. These horses are native to the region and thrive largely without human assistance among the wetlands here. All are white (technically "grey") in colour, but you can spot foals and young horses by their darker black or brown coats which will turn paler as they mature. The land is exceptionally flat in this area, making for easy biking and allowing you to give your attention to the scenery and wildlife.

As with all our cycling holidays in France and elsewhere, accommodation, bicycles and luggage transfer are all organised for you, enabling you to simply enjoy the wide variety of experiences on offer.

Cycling Holidays France
Cycling Holidays in France (as well as Austria, Germany, Italy, Spain and the UK). Cycle Breaks are specialists cycling holidays and bike tours in France and other mainland European countries including Austria, Germany, Italy and Spain. Operating since 1991, we offer a high level of personal service and extensive experience. We love what we do, and it seems that our customers do as well.